The Effect of Head Cooling on Brain Damage in Newborns 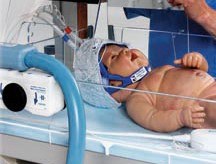 In every 1000 births, one to two newborn, otherwise healthy infants experience a lack of oxygen from a variety of different causes.

This oxygen deficit, called Hypoxic-Ischemic Encephalopathy (HIE), can result in brain damage or even death for the infant. New studies suggest that cooling the heads of certain babies deprived of oxygen at birth if done promptly can increase their chances of survival, as well as reduce the severity of brain damage.

In a recent study of 218 babies deprived of oxygen, half were treated with “cooling” caps starting 6 hours after birth for 72 consecutive hours. The hats controlled the temperature of the infant’s head by circulating cold water in a plastic cap between layers of fabric, lowering the infant’s rectal temperature to between 93 and 95 degrees Fahrenheit. The other 109 infants received standard care. Though the difference between the results of the cooling caps and the standard care initially was not dramatic, 18 months later, 66% of the infants who received standard care had died or had severe disability versus 55% of the infants who wore the cooling caps.

In another clinical trial, done at multiple international locations, researchers used brain wave analysis to identify newborn babies able to benefit from the cooling caps. The results showed that, for some infants with moderate to severe injury, wearing the cooling caps substantially reduced the percentage of babies experiencing an unfavorable outcome (defined as death or neuro-development disability) from 66 percent to 48 percent.